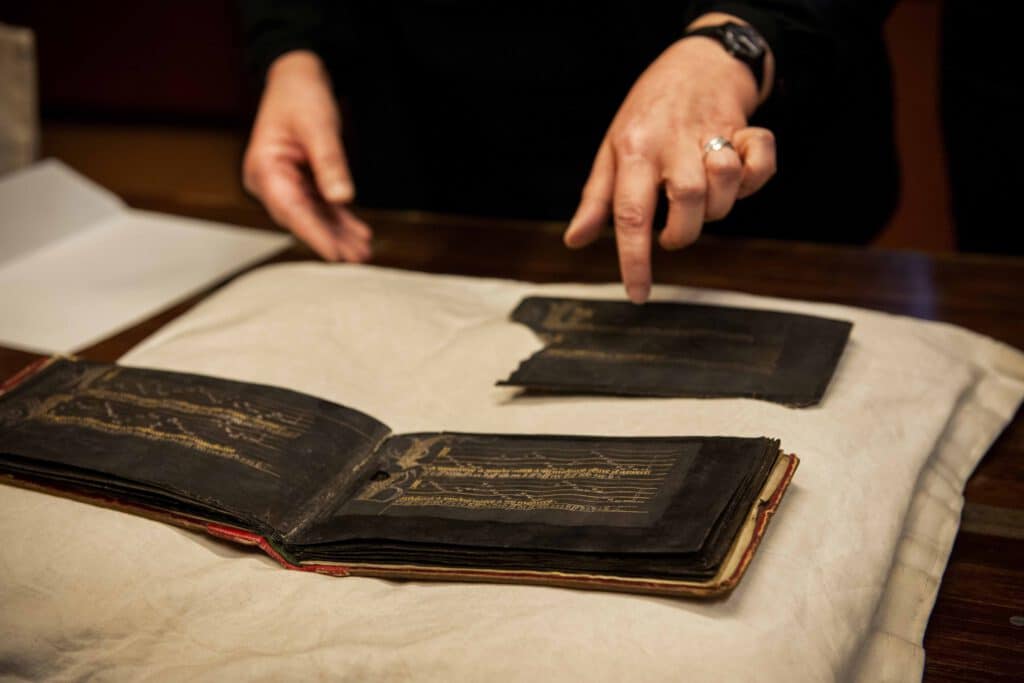 From 22 November 2022, you can admire a new selection of manuscripts and prints from the time of the Burgundian dukes at the KBR museum. One book is very special: the “Basses danses” by Margaret of Austria, daughter of Mary of Burgundy and Maximilian of Austria. The pages are indeed … black.

It is highly unlikely that you have ever seen handwriting on black parchment before. Only seven specimens are known worldwide today. The parchment pages of these manuscripts were coloured with carbon or iron gall.

Mediaeval manuscripts are by definition unique and very expensive, but with their 25 black folios, these “Basses danses” are an unseen luxury. At the Burgundian court, the colour black symbolised luxury and prestige. Moreover, the black pages were written upon with silver and gold ink, which only further emphasises the importance of the manuscript.

The black colour gives a beautiful result, but presents quite a conservation challenge. The black dye affected the parchment fibres, making the manuscript very brittle over time.

There were some attempts to restore the manuscript as early as the 19th century, but these did not yield the desired results. To prevent the outer edges of the manuscript crumbling away, the folios were encased in a black frame of paper. Those frames kept the manuscript stable in the short term, but because parchment is an organic material, it shrinks over time and the parchment gradually came loose from the frames. This damaged the pages even more.

So the manuscript is spectacular, but at the same time extremely fragile. Therefore, it is almost never removed from its repository. However, following the completion of a research project and the publication of a facsimile, you will have a unique opportunity: on 3 and 4 December 2022, the original manuscript of the “Basses Danses” will be on display for one weekend at the KBR museum. Before and after that date, a facsimile will take the place of the original book.

The basse danse (low dance) was a dance performed at court in the 15th and early 16th centuries. The word “basse” describes the style of the dance, in which dancers gracefully glided across the floor and barely got off the ground. Sophisticated basse danse belonged in aristocratic circles and contrasted with less elitist dances of the Middle Ages, which allowed for more movement and occasionally involved jumping or hopping.

Margaret of Austria’s “Basses danses” manuscript includes fifty-eight dances, accompanied by their melodies and choreographic instructions. The book was produced around 1500 and is the oldest known dance book from the Low Countries. Consequently, the manuscript is known worldwide as one of the main sources for this dance style and its accompanying music.

Although the manuscript contains an ownership note and a place mark from the library of Margaret of Austria, it was probably commissioned by Philip of Cleves and Françoise of Luxembourg.

The aristocratic couple may have donated the manuscript to Margaret of Austria around 1500 as a sign of continued loyalty, after Philip of Cleves fell from the grace of Maximilian of Austria, the husband of Mary of Burgundy.

KBR and the Alamire Foundation have conducted some research into the “Basses danses” over the past year, resulting in the publication of a high-quality facsimile of the manuscript in the Leuven Library of Music in Facsimile series. The accompanying study of the facsimile was written by an international team of experts in music, dance, codicology and the history of Margaret of Austria’s book and art collections. Would you like to know more about this project? Then watch the documentary on alamire.tv.

The “Basses danses” has not been shown to the public for the past 30 years. Don’t miss this unique opportunity to see the original and visit the KBR museum on the weekend of 3 and 4 December 2022. This weekend, you will also have the chance to take part in the open workshop: Get started with the “Basses Danses”.