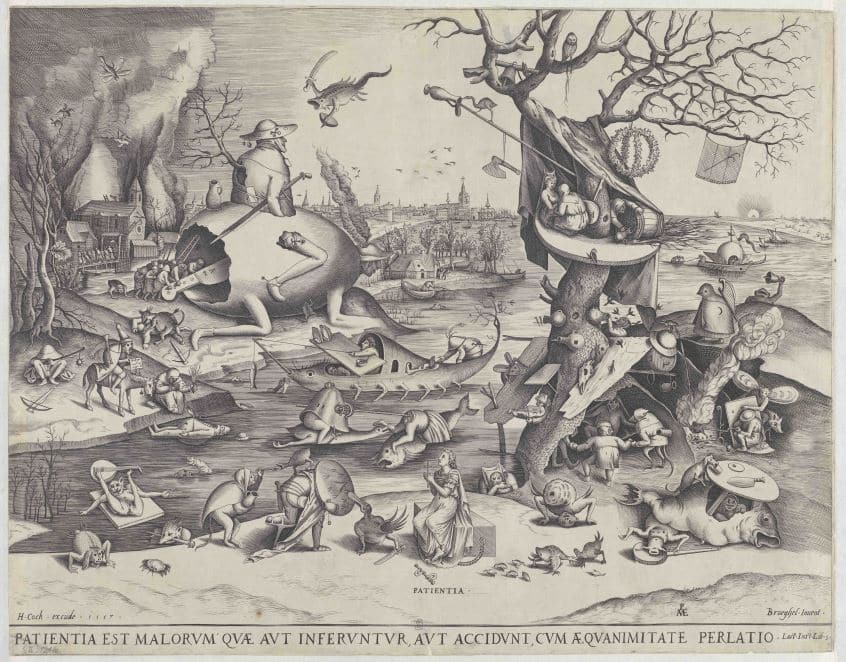 You don’t find a new print after Pieter Bruegel the Elder (ca. 1525-1569) every day, but that is precisely what happened to intern Margaux Nogues. During the restoration of The Stone Operation from the KBR collection, she made a remarkable discovery: on the back of the print is a second Bruegel print.

Time for a bath

Before the engraving was placed in a bath of hot water to remove the cardboard, tests were conducted to determine  whether the glue between the cardboard and the print was water soluble.

Once in the bath, the water immediately penetrated the cardboard so that it could easily be removed. When the cardboard was removed from the tub, intern Margaux Nogues was surprised to discover a second engraving on the back of the document: the Patientia.

On the sheet, there are therefore two engravings executed by Pieter van der Heyden (c. 1530-1572) according to designs by Pieter Bruegel the Elder: The Stone Operation from 1559 and Patientia from 1557. Both engravings were published in Antwerp by publisher Hieronymus Cock (1518-1570).

Recto-verso printing was not common in the 16th century: it is very unusual to find two engravings on the front and back of a sheet.

The copper plates used to make these prints are of different sizes. Due to the high pressure of the press, the images lie deeper in the paper. As a result the ‘plate edges’ do not match properly. Therefore, it cannot be ruled out that this is a kind of proof that was not initially intended for the regular market.

KBR already had three prints of the Patientia in its collection, but it remains an exceptional find.

The rediscovered Patientia shows the personification of patience. She is surrounded by various monsters and fantastic creatures, in the style of the then-popular Hieronymus Bosch (ca. 1450-1516), which represent evil and sin in the world.

The caption in Latin can be freely translated to: “Patience is the calm endurance of evil that befalls you.”

In this design, Bruegel also mocks the Roman Catholic Church by including some monks and even a giant wearing a cardinal’s hat, a part of the print that was censored in later prints.

Would you like to learn more about KBR’s collection of prints and drawings? Then be sure to take a look at the online catalogue.