For a significant part, the original core of the manuscript collection comes from the Library of the Dukes of Burgundy. Since the Middle Ages, this collection has been regarded – with good reason – as one of the most prestigious libraries in the Western world.

The Library of Burgundy

The collection dates back to Philip the Bold and was continued by his successors, John the Fearless and Philip the Good. At the time of Charles the Bold’s death, the collection already contained as many as 950 volumes, of which around 270 are held in the Manuscripts Department in Brussels while another 120 can be found elsewhere in Europe.

Discover this unique collection now in the KBR museum . 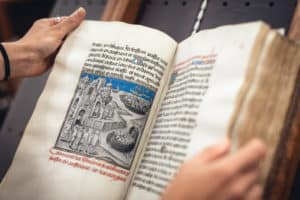 The Royal Library of the Low Countries

After Charles’ death, the Librije (library) of Burgundy, as part of the Burgundy estate, passed on to Mary of Burgundy, Philip the Handsome, Charles V and then to Philip II, who founded the Royal Library of the Low Countries on 12 April 1559. In fact, this library may be considered the direct predecessor to the present Royal Library of Belgium. When French troops occupied Brussels in 1748, they transferred around half the collection to Paris, though most of these volumes were returned in 1770.

Dissolution of the monasteries during the reign of Joseph II

In 1773, with the suppression of the Jesuits, the collections’ acquisitions grew significantly. Dozens of codices collected in the region by the Jesuits ended up in the Library. A few years later, Emperor Joseph II disbanded other monasteries of contemplative orders while manuscripts from monasteries and abbeys in Brabant (Gembloux, Rooklooster, Sint-Maartensdal …) were also acquired by the Library.

Confiscation during the French Revolution

However, this period of peace and expansion was not to last: in 1794, the Commissioners of the French Republic transferred a large number of the “Burgundian” manuscripts to Paris. The Library only succeeded in recovering most – though not all – of the manuscripts seized by France in 1816 after the Congress of Vienna. While some works remained in Paris, others that were not originally part of the Burgundian Library were sent to Brussels.

Luckily, the years that followed were not as turbulent and the collections in the Manuscripts Department continued to grow, following purchases and donations. In 1837, the new Belgian State acquired the library of the Ghent bibliophile Charles Van Hulthem, which contained approximately 1,100 codices, some of which have proved crucial to the understanding of Middle-Dutch literature.

The collection continues to grow

Between 1839 and 1953, the Manuscript Department acquired another 11,000 volumes. Some are medieval works, but there are also archival items dating from the 16th, 17th and 18th centuries and a large number of texts and original manuscripts by Belgian authors and artists. From the mid-twentieth century onwards, the acquisition of new items started to slow down, although new acquisitions – of both literary and historical works – are still registered every year.