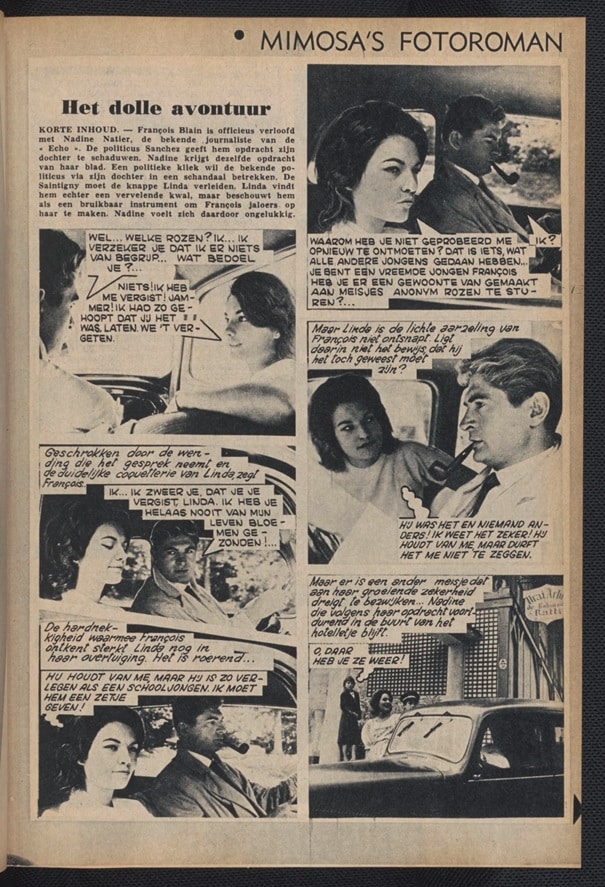 PHOTO-LIT is a research project funded by the BRAIN-be framework.

Why the photo novel?

The photo novel remains a blank space in the cultural history of Belgium: a genre overwhelmingly present yet wholly ignored or actively discarded by researchers. The first aim of the project is to actually produce the archive that until now only exists in a shattered and unorganized way.

The existing material, hosted, yet hardly catalogued, by Belgian archives and libraries as well as in private collections has never been explored, contrary to the well-studied domain of comics and graphic novels.

A large portion of the relevant Belgian collections are at the premises of KBR, such as Bonnes Soirées and Femmes d’Aujourd’hui/Het Rijk der Vrouw. The corpus covers both the period 1947 – 1965 (before legal deposit) and 1966 – today (since the introduction of legal deposit).

The aim of this research is twofold:

The framework enables to produce a media-focused, interdisciplinary and comparative analysis of a ‘forgotten’ cultural practice. It includes an open view of the relationship between print culture and digital culture. While aiming at the creation of an up to date, open and collaborative digital archive, it is not an attempt to shift from an analysis based on print culture to an analysis based on digital-born documents and practices, but a broadening and widening of existing humanist research: it is less “post-print” than “print-plus”, and it respects the historic and material specificity of each medium.

To conclude this four-year project, the KU Leuven University Library will host an exhibition on the Belgian photo novel, from 18 March to 9 May 2021.

More about this project