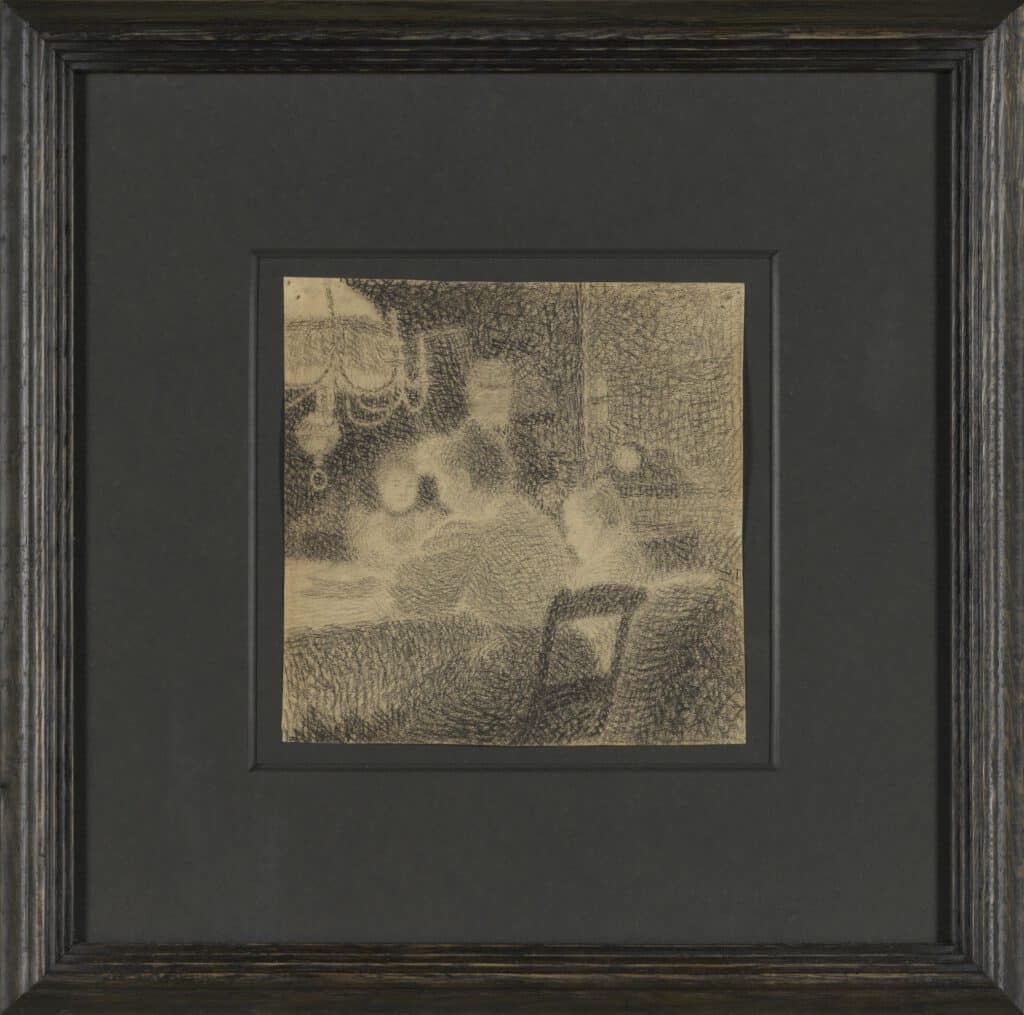 KBR holds an important collection of drawings dating from the fin de siècle, but an essential aspect of Belgian art from the turn of the century remains under-represented: the essential contribution of female artists. Jenny Montigny (1875-1937) was undoubtedly one of the most prominent female artists of this period. KBR recently acquired an early drawing by Montigny. The bourgeois interior was drawn around 1900.

This atmospheric scene is a masterly play of light and dark, characteristic of the so-called luminism movement, of which Montigny was a prominent representative.

The drawing shows a bourgeois interior, possibly the artist’s family home, and remained in the family collection until 2020. It is one of two drawings by Montigny that have been included in the reference work Impressionnisme et fauvisme en Belgique by Serge Goyens de Heusch.

The pointillist-like drawing technique is very striking. It reminds one of the post-impressionist works of Georges Lemmen, Théo Van Rysselberghe and their contemporaries. Although unsigned, Montigny probably considered the drawing to be an independent work of art. 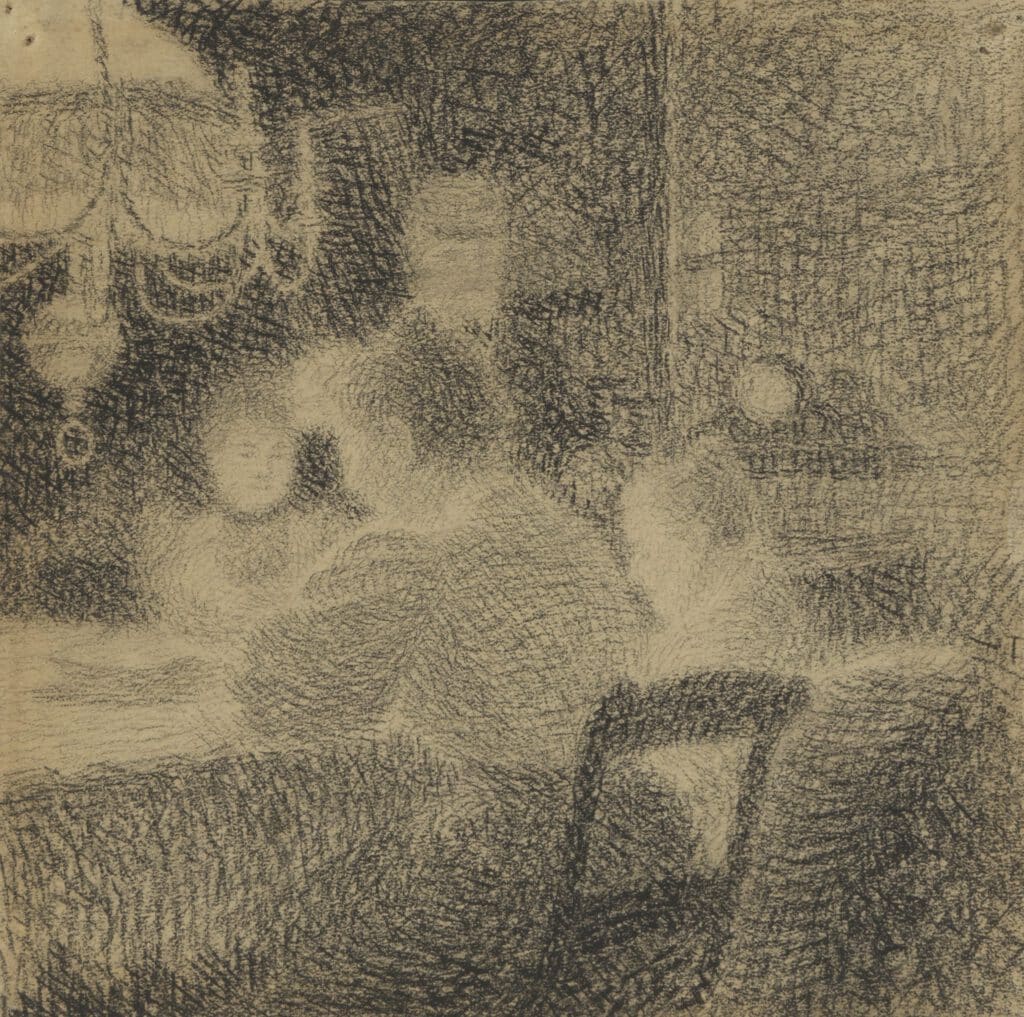 Jenny Montigny was born into a well-to-do middle-class family in Ghent. She became interested in art after seeing the impressionist work of Flemish painter Emile Claus. Montigny even took private lessons with him at his country house Villa Zonneschijn.

Montigny’s ambition as an artist was not supported by her parents. She therefore settled in 1904 in nearby Deurle (see photograph). Montigny was one of the rare female artists of the time to live on her own, without parents or husband. She made her debut at the Ghent Salon in 1902 and was a founding member of the artists’ group Vie et Lumière, to which Emile Claus and James Ensor also belonged. 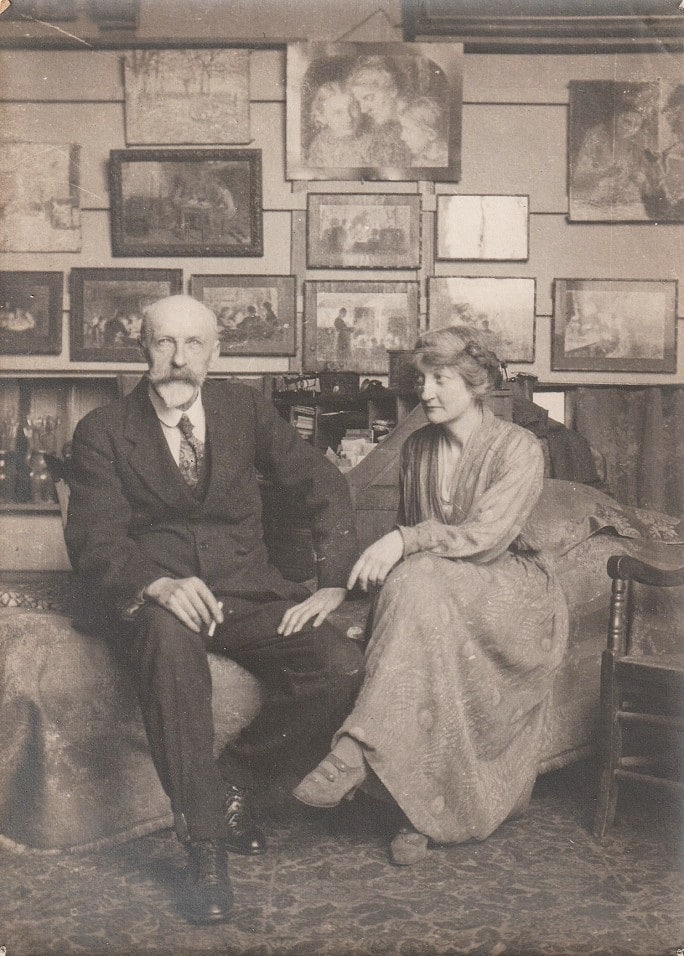 Emile Claus and Jenny Montigny in her house in Deurle, 1920. Photograph.

In recent years, Jenny Montigny’s work has been enjoying renewed attention both in Belgium and abroad. In 2019 the city of Ghent even named a street after her.

Important addition to the drawings collection

KBR owns a series of etchings by Montigny, but we did not yet have a drawing by her hand in our collections. Moreover, works by female artists are still under-represented in the collection. It is our ambition to be able to show as diverse and representative an overview of the Belgian graphic arts as possible .