Six centuries ago, Brussels belonged to the rich and powerful Dukes of Burgundy. The Dukes were skilled politicians and cultured patrons, and established one of the most prestigious manuscript collections in the world, a unique treasure.

The collection is started by Philip the Bold (1342-1404). After the death of Charles the Bold in 1477, the ducal library consists of more than 900 manuscripts, of which a third is preserved at KBR today.

At the intersection of medieval and modern times, this “Library” covers all areas of science and contains very important texts from medieval literature. It is one of the largest libraries of its time, together with the library of the French kings, the Medici and the Vatican Library. The manuscripts are illuminated by some of the best miniaturists of the 15th century, of whom were arguably just as famous as Jan Van Eyck. 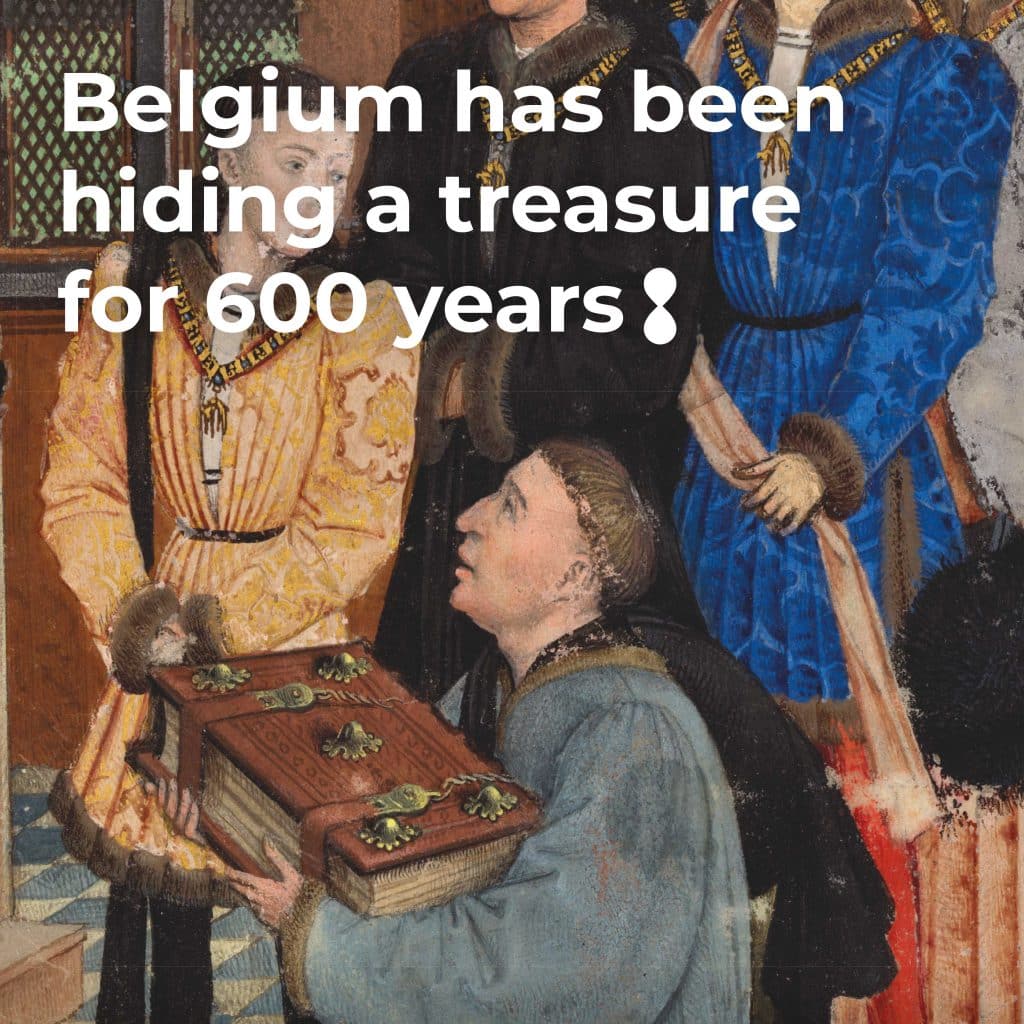 The ducal library is expanded considerably under Philip the Good. Burgundy’s power reached its peak under his rule – which lasted almost fifty years. As a great art lover and bibliophile, the Duke places one prestigious commission after another. The best miniaturists of his time illustrate the manuscripts made for him.

This way he gives a new impetus to the art of the book. Nobility, clergy, bourgeoisie and urban governments, they all follow the example of the Great Duke of the West. They place numerous orders at the workshops of copyists, illuminators and bookbinders. A sort of ‘canon’ of the Burgundian luxury manuscript is created: execution on parchment, large format, richly illustrated, a book cover of quality, a layout a lot of blank space and a preference for the font of the Burgundian bastarda.

The Burgundian library touches all domains of medieval thought: literature, ancient history, sciences, morality, religion, philosophy, but also law, poetry and knightly novels. The oldest works date from the 13th century, the most recent from the end of the feudal era. Many works are written at the request of the dukes by famous copyists such as Jean Miélot, Jean Wauquelin and David Aubert.

The origin of the KBR collection

Some of the works accompany the itinerant dukes, but the majority remains in the library of the palace on the Coudenberg, in Brussels.

After the death of Charles the Bold, the ducal library is passed on to his descendants, but the collection has to endure a lot. The collection is left to itself and must withstand looting and theft.

In 1559, Philip II collected all manuscripts in the Coudenberg Palace and founded the Royal Library of the Netherlands, the direct predecessor of KBR. The ducal library is therefore at the core of the current national library of Belgium.

A collection that survived fires

In the winter of 1731, a fire destroyed large areas of the Coudenberg Palace, where the manuscript collection is kept. Servants throw the books out of the windows of the palace tower, giving priority to the most prestigious manuscripts. Many handwritten books must have gone to waste.

After the fire, the manuscripts move to the ground floor of the large chapel in the palace, that was spared from the fire. Unfortunately, almost a hundred years later, in 1827, fate strikes again. Fire breaks out on the highest floors of the Palace of Charles of Lorraine in Brussels, where the Royal Library has now been housed. The fire does not get hold of the manuscripts, but the extinguishing water causes irreparable damage. Dozens of leather and parchment bindings do not survive the water damage.

During the French occupation of Brussels from 1746, about half of the Burgundian manuscripts were transferred to Paris. Most volumes return to Brussels in 1770, but the peaceful period following the treaties of Aachen is short-lived. In 1794, the commissioners of the French Republic again transfer a large part of the manuscripts of the Burgundian dukes to Paris. It is only after the defeat of Napoleon and the Congress of Vienna in the early nineteenth century that most manuscripts seized by France return to Brussels. Some works remain in Paris, while manuscripts that were not originally part of the Library are brought to Brussels.

When you read the eventful history of the Library of the Dukes, it seems a wonder that about 300 manuscripts from the collection of the Dukes of Burgundy have remained together. The current collection, which is kept in the Manuscript Department, now contains about one third of the 1,000 manuscripts listed in a fifteenth century inventory. A hundred other works are in other European or American collections. There must also be manuscripts of the Burgundian manuscripts that remain hidden in private collections.

That is why KBR’s collection, with its 300 works, is an incredibly precious treasure. KBR shares this treasure with you in the KBR museum.