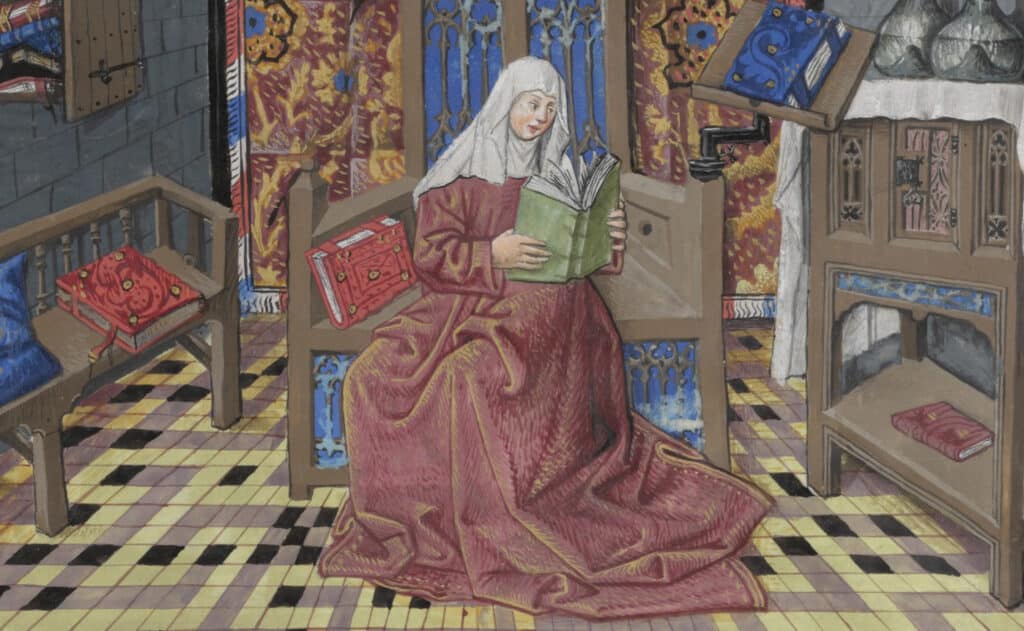 Was Christine de Pizan one of the first feminists in history? As a poet and philosopher in the late Middle Ages, she was the first female French-speaking author to earn a living as a writer. The Library of the Dukes of Burgundy held many works by this exceptional character. But how did she become a prolific author? And what makes her work so interesting?

Who was Christine de Pizan?

Born in Venice circa 1364, Christine de Pizan was the daughter of Thomas de Pizan, doctor and astrologer to the French king, Charles V. Her father gave her a valuable education, encouraging her to learn and awakening her taste for the humanities. Christine thus enjoyed a dual culture rooted in both Italian humanism and Parisian intellectual circles. At the age of 15, she married the king’s secretary, Étienne de Castel, an educated and cultured man.

Starting out as an author

Christine was 25 years of age when she lost her father, then her husband, and found herself alone with three children, with no means of support or income. She chose not to remarry and decided to live from her writing so she could support herself. She began writing courtly poems, taking advantage of her high-level connections and developing a professional network.

In the 15th century, poetry was one of the only ways for upper-class women to enter the literary world. She managed to revolutionise this field and built up her legitimacy as a writer working on her sources and her style. Her writings were so successful that even members of the royal family commissioned works from her, including Philip the Bold, Duke of Burgundy and the Duke of Berry.

The author was also a copyist. Many autograph manuscripts remain, with corrections in her handwriting. Christine regularly used the same artists for the miniatures and did not hesitate to give precise indications regarding the illumination. She also played an active role in the making and distribution of her works, and was probably at the head of a small manuscript production workshop.

Christine de Pizan soon began to include her own opinions in her work. She studied history, philosophy and politics. For her, writing became a weapon for critical reflection on the society of her time and an instrument for making her voice heard by the powerful.

Even in her first texts, she fought against the misogynistic prejudices disseminated in some literary works and church speeches. She liked to remind people that women were not only virgins, wives or widows and that they should play an active and enlightened role in society and in politics, so they could offer moral guidance.

The fight against misogynistic literature

In this context, she left her mark on a French literary debate known today as the “Querelle des femmes” (The Woman Question). This was not a conflict between women, but a debate of ideas on the status and condition of women. It began in the 15th century, but regularly reappeared until the 20th century. Can we now consider it finished?

Christine de Pizan began the “Querelle” by attacking the admirers of the famous Roman de la Rose (Romance of the Rose), written in the 13th century. She denounced the misogyny of this great classic of medieval literature. A lively debate, through interposed texts, opposed the author and her supporters against a few Parisian scholars.

The “feminism” of Christine de Pizan

Among her most famous texts, La Cité des dames (The Book of the City of Ladies) is a pillar of proto-feminist literature, written as a reaction to the misogyny of certain literary works. Two manuscripts from the Cité des dames are currently on display at the KBR museum.

In the book, Christine, with the help of Reason, Righteousness and Justice, builds an allegorical fortress in which women are protected and recognised for their virtues. The castle, which can be seen in the miniature on the right, offers a refuge from attacks by those who uphold the superiority of the male sex.

A mosaic of women

The books La Cité des dames presents a mosaic of female figures from history and mythology as well as some of her contemporaries. These were women who had distinguished themselves in science, art, politics, the military sphere and many other fields. The Virgin Mary stands side-by-side with Medusa, Semiramis, Sappho, the Amazons and Margaret of Burgundy. Prophetesses, sibyls, and witches are all honoured here.

In response to the violence suffered on the outside, the author invented a utopian city built by women, where consensus and respect were the order of the day. Was this an invitation to rethink cities and the social relationships at work there?

Discover the thematical focus “Witches avant la lettre” at the KBR museum before 9 May 2022, study the manuscripts of Christine de Pizan very closely and discover the answer to this question!