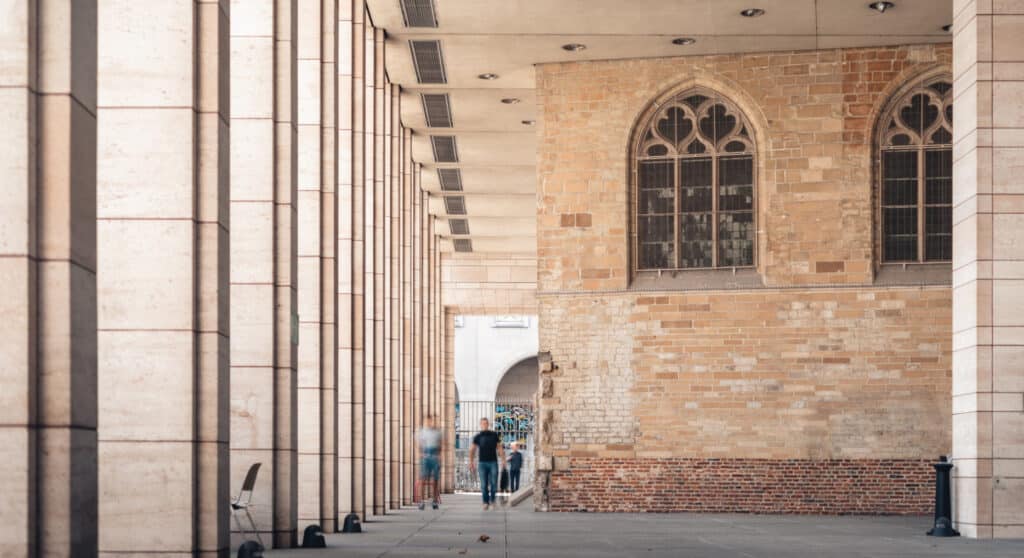 The Nassau Chapel is part of the KBR museum. In the previous blog post, you read part 1 of the eventful history of this 16th-century chapel. Today, you will discover why it is walled in in KBR’s modern building.

Redevelopment of the Mont des Arts

The current KBR building is an impressive structure that is part of a larger unit: the Mont des Arts (‘Mount of the Arts’). The redevelopment of this site was entrusted to Jules Ghobert in 1937, when he won an urban design competition.

The competition rules provided for the preservation of a number of historical buildings on and around the Mont des Arts, such as the 16th century Nassau Chapel and the apartments of the Palace of Charles de Lorraine.

Unfortunately, putting the theory into practice turned out to be another thing. It seemed unfeasible to leave the chapel in situ. Problems arose with the construction of the renovated site of the Mont des Arts and the new national library that formed part of it, the plans of which were entrusted to the architect Maurice Houyoux. In the end, the chapel was condemned to be demolished.

Scale-model of the redevelopment of the Mont des Arts

Construction work on the library finally began in 1953. At the same time, new protests arose against the disappearance of the chapel of the Nassau Palace. The architects reviewed the problem and proposed to carefully dismantle the chapel and rebuild it inside the library, if the necessary funds could be found.

After much wrangling, the decision was made in 1962 to keep the chapel as it was. In the meantime, however, architect Maurice Houyoux had passed away. The architects Roland Delers, a colleague of Houyoux, and Victor Bourgeois were asked to draw up plans that would both preserve the chapel and give the new facade a uniform appearance. After several refusals and on advice of the architect Pierre Puttemans, it was unanimously decided to extend the facade of the library to the old buildings of Charles de Lorraine and to build a colonnade in front of the chapel.

The Nassau Chapel was finally fully restored and incorporated into the buildings of the new Albert I Royal Library. On 17 February 1969, the chapel was inaugurated as an exhibition space in the presence of King Baudouin and Queen Fabiola. Exhibitions were held in the chapel until 2019.

The architectural jewel of the KBR museum

Today, the Nassau Chapel is part of the KBR museum, where the manuscript collection of the Burgundian dukes is on display. Since religion was omnipresent in 15th century society, it’s hard to imagine a more suitable place to exhibit the religious manuscripts from the collection.

Want to find out which illuminated manuscripts you can currently admire in the gothic chapel? Plan your visit to the KBR museum today.