In medieval times, animals and people live very close together. Animals are omnipresent, especially in the fantasy world and in symbolism. Some animals are more popular than others. For example, rabbits, monkeys, foxes, wild boars, bears … have many connotations that we no longer think of today. 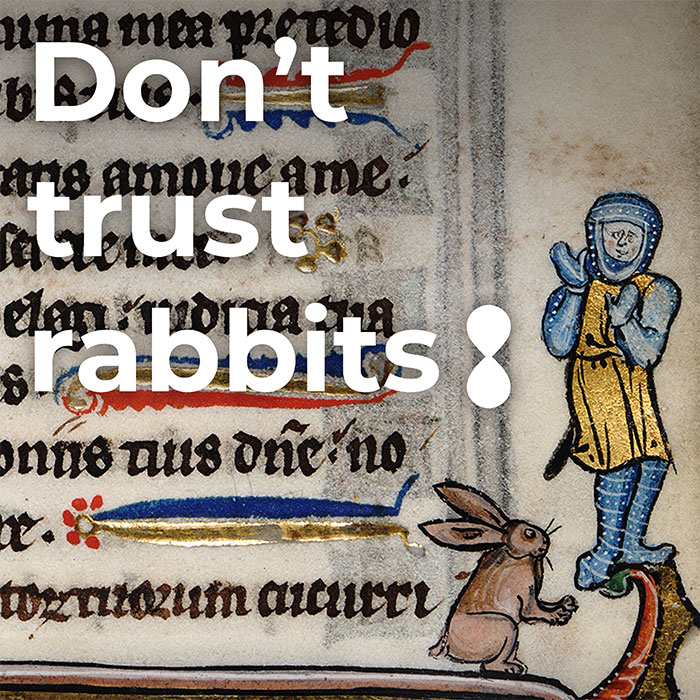 We often find them in the miniatures and borders of manuscripts where they give rise to ambiguity and layered humor. Sometimes they also become a mirror that distorts reality and paints a picture of humanity.

Not an innocent animal

Today, rabbits are considered to be cute and cuddly. In the Middle Ages, however, things were slightly different… The rabbit was considered a lusty, licentious beast.

The etymology of its Old French name, “conil” or “connin”, refers to the Latin “cuniculus” which also means “underground passage”, “pipeline”, “pipe” or “tube”. But this word is also used to allude to female genitalia and female desire. From the 12th century onward, bawdy puns emerged often in literature, for example in the Roman de Renart.

These hopping rabbits, who hide in their burrows or try to escape the arrows of hunters, take on a completely different dimension.

The symbolic meaning of certain animals has passed through the centuries and allows us to discover how animals were seen in the Middle Ages. The wolf, which still terrorizes our children today, is the best example. However, could you have thought that the owl had a reputation for being lazy or that the stork was associated with clergy? You also have the wild boar, the deer, the fox … What are they hiding?