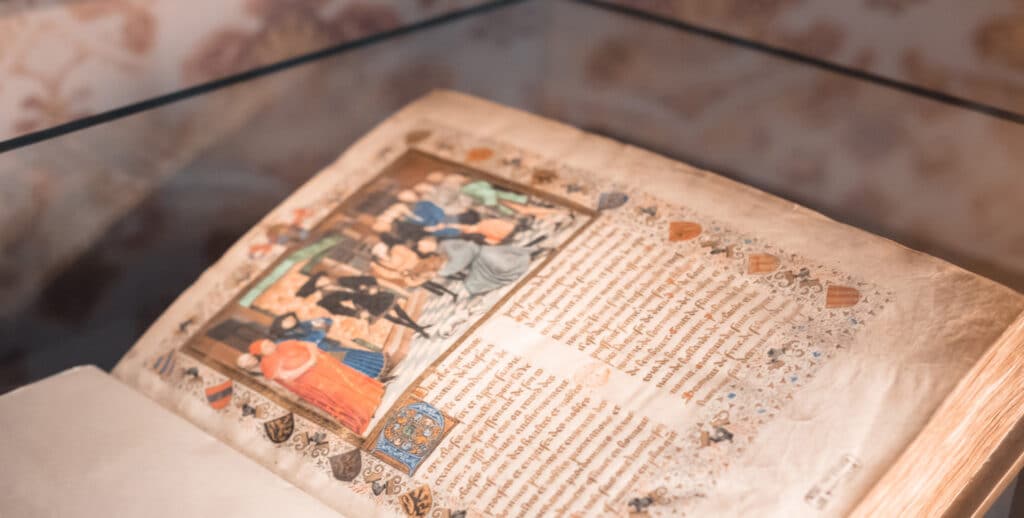 In the miniatures of manuscripts, certain scenes keep reappearing. One of these is the dedication scene: a scene in which the author or translator presents his finished book to their patron. These scenes do not only occur in the Middle Ages, quite the contrary. We also see them in other periods and far beyond Europe’s borders. It is therefore a universal image.

The opening miniature (also called “frontispiece”) of the Chroniques de Hainaut also shows this classic scene. Translator and compiler Jean Wauquelin presents his work to the duke, in the presence of the most important dignitaries of the Burgundian court.

Yet, even within this universal genre, the presentation scene of the Chroniques de Hainaut is extra special. When it comes to the artist who painted it, a very familiar name pops up…

Next to Jan van Eyck, Rogier van der Weyden is considered one of the most important Flemish painters of the 15th century. Today, Van der Weyden owes his fame to his paintings. In his time, however, it was not unusual for artists to paint on both panel and parchment. Manuscripts were considered important and luxurious works of art in the 15th century. Only when printing books became the norm did painting become regarded as the most important art form within the fine arts. This is also the reason why we, along with many others, dare to claim that the most beautiful works of the Flemish Primitives are most likely to be found in books.

Strangely enough, the frontispiece of the Chroniques de Hainaut is the only miniature that is attributed to Rogier van der Weyden. Although there is no documented evidence that he painted the miniature, stylistic analyses (especially the design of the faces), the study of the underlying drawings and the painting technique, suggest that he made it.

The masterpiece made such an impression on contemporaries that it was copied by numerous other artists. They could never match the quality of Rogier van der Weyden’s miniature, but they made the work an important reference.

Symbolically and iconographically, this scene in the first volume of the Chroniques de Hainaut is remarkable. Philip the Good is at the centre of this composition. He is depicted standing, rather than seated on a throne, as is the tradition. He is set apart from the others, and all eyes are turned towards him. Dressed in black damask, the duke stands out clearly against the background.

Next to the duke stands his son, the young Count of Charolais and the future Charles the Bold, aged about fifteen. As the heir apparent, the young Charles embodies the continuity of the State. The message here is clear: princely power is not the work of one individual, but rather becomes the prerogative of a dynasty that aspires to be a lasting one. 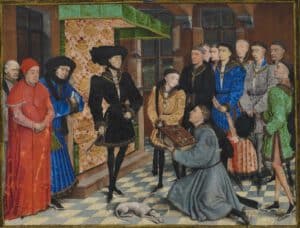 The Chroniques de Hainaut have a clear function: they have to show that the power over Hainaut belongs to the dukes. In 1433 Philip the Good annexed Hainaut, Holland and Zeeland, which he took from his cousin Jacqueline, Countess of Hainaut.

Jean Wauquelin, a bookseller and copyist in Mons, translated the Annales historiae illustrium principum Hannoniae by the Franciscan Jacques de Guyse into French for Philip the Good in 1446. This vast compendium retraces the history of the province of Hainaut, which had recently been annexed by the duke.

A total of 4 copyists and more than 10 illuminators worked on the 1,700 pages and 121 miniatures of the “Chroniques de Hainaut”.

Jean Wauquelin not only copied the manuscript, he also translated the original Latin text into French, with some adaptations. One notable inclusion is a prologue presenting Philip the Good as the legitimate heir to a line of sovereigns dating back to the Trojan War.

The Chroniques de Hainaut are therefore a real propaganda tool: a majestic book that had to legitimize a seizure of power.

Would you like to admire the frontispiece of the Chroniques de Hainaut with your own eyes? Then visit the KBR museum before 11 May 2021.

Afterwards, you will have to wait at least until 2027 to see the opening miniature again. So don’t postpone your visit for too long.